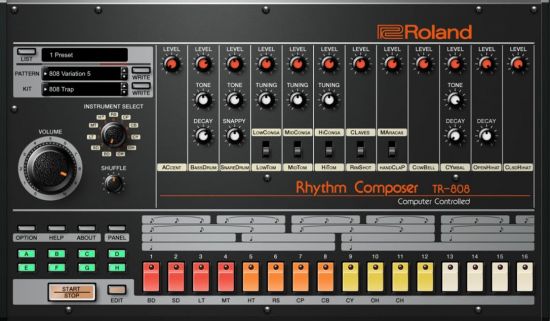 Roland.VS.TR-808.v1.0.4-R2R | 14.6 MB
In 1980, the Roland TR-808 Rhythm Composer was released to an unsuspecting and somewhat bewildered public. To many at the time, its tweakable analog tones didn’t exactly deliver “traditional” or "realistic" drum sounds. It wasn’t until after a few adventurous musicians and producers got their hands on the TR-808 and started tweaking those knobs that the world would feel the impact it would leave on music forever. For decades since, the sizzling hi-hats and snappy snare, the clicky rim shot, the unmistakable cowbell, and yes-that booming bass drum-have been heard on worldwide hits and underground classics. Its influence is so deep that it’s been name-dropped in famous tracks, had albums dedicated to it, bands named after it, and is even the subject of a feature-length documentary film.

TR-808 Rhythm Composer
The legendary Rhythm Composer returns
The boom, snap and sizzle of the most famous drum machine ever, now in your DAW
The Thing That Goes Boom